Consumer Sector, the Hero of the US Economy in 2019

Last month, the Fed had announced the benchmark rate cut for the third time this year to prevent the economy to fall due to global weakness and the trade uncertainty. The Fed Fund Rate is currently ranging from 1.5% to 1.75%. Though the record-long US expansion cooled further in the third quarter, the US economic growth still kept up at a solid pace as strong consumer activity partially offset the effects of ongoing trade disputes among the largest economies.

The distribution of GDP by component in the US is quite different from other countries. Consumer spending is the main driver of the US economy, accounting for 70% of the country’s economic activity. Especially during the time that manufacturing and business investment were contracted due to trade war and political risks, consumer spending still shines— an observation that the Federal Reserve chair, Jerome H. Powell, made after announcing that the central bank would trim benchmark interest rates to keep the economy from a downhill slide.

The Q3 GDP of the US increased at a 1.9% annualized rate, above the expectation of 1.6%. Personal spending rose at a 2.9% annually in the third quarter and exceeded projections for a 2.6% increase, after increasing at a 4.6% in the previous three months. The inspiring US GDP growth is mainly contributed by consumer spending. Personal consumption contributed 1.93% to third-quarter GDP growth while government added 0.35%. Residential real estate contributed to growth for the first time since the end of 2017 amid lower mortgage rates, giving a 0.18% boost as the sector rebounded to a 5.1% growth pace.

Contributions of US GDP by industry (%) US consumers have mostly kept tight to their optimism as consumer confidence is near historical highs. We can see consumers are helping to hold the economy and further allaying financial market fears of a recession, though they are spending at a less robust pace than last year, aligning with a broader slowdown in economic growth. Although consumers cut back on purchases of big-ticket household items and clothing, which could temper slightly the expectation for a strong holiday shopping season, the US retail sales still recorded a rebound in October.

Other favourable factors in addition to the robust consumer sector

Except the robust consumer spending, what other contributors that have helped out the US economy to be the star compared to other advanced economies? The outstanding labor market has no doubt played a big role in it. In the US, the unemployment rate has fallen to a half-century low, most people are employed, and household income is rising steadily. Even though job creation is slowing down, it is still running above the rate of expansion in the working-age population. In the meantime, it is also notable that the inflation is still mild.

Investment and consumption have played important role in growth, not just in the US but globally.

The general concern over the more-than-a- decade economy growth is that the current slowdown in business investment will eventually spill over to the consumer sector, then restrain economic growth; however, Powell said in the Fed meeting that such risk is not within the Fed’s concern due to the strong labor market. . Household outlays, muted inflation and healthy labor income increases, point to a slowing but still expanding economy. 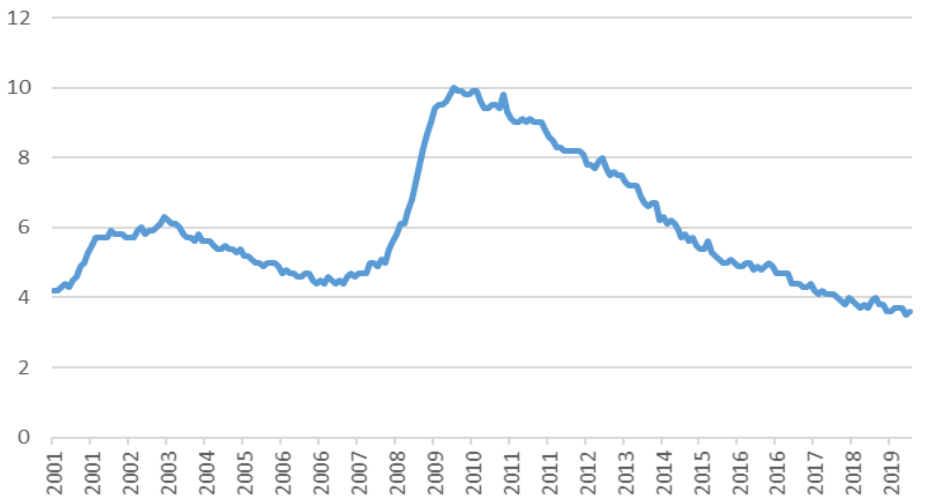 Q4 tends to be the hottest shopping period for consumers in US as observed in the past. While approaching to year end, sales are almost certain to heat up further as the holidays are approaching and the labor market will stay tight due to the increasing demand of consumer sector. Some companies already started to take actions to face the peak season in advance. For example, Radial, Inc., which fulfils orders for retail brands like Cole Haan and Rag & Bone, plans to add 21,000 temporary workers to handle the rush. Additionally, E-commerce is also expected to continue growing during the Christmas season. On the other hand, as the coming season is very important to the US economy, we don’t expect any trade tension would be escalated by the US side. Therefore, we expect the consumer sector, as the critical driver of the US economy, will continue hold the economy up.

Recession not coming yet

Seen from our perspective, we consistently believe that it is too early to say the recession in US due to the solid consumer sector. On the other hand, as Greenspan, the former chairman of the US Federal Reserve, emphasized the US economy would not experience a recession during the time of reducing the country’s debt level as observed in the history. According to the Fed statistics of capital expense and debt borrowing in the business sector, Greenspan pointed out that the US business sector has been cutting corporate debt since 2008; therefore, the United States is not only in a state of slowing economic growth, but in a state of debt reduction.

In the past half century, the US economy has never experienced a recession during the period of debt reduction in the business sector. Therefore, it is reasonably believed, there will be no exception for the current situation as well.