Trade disputes between the US and China have escalated since 2018, pitting the two largest world economies against each other in a conflict that has greatly weakened global investor confidence and business development opportunity. Additionally, significant trade uncertainties and rising tariffs have greatly disrupted the manufacturing industry and further stunted global economic growth.

On January 15, 2020, the US and China signed the Phase One trade deal (US-China Economic and Trade Agreement) in Washington D.C., easing trade tensions after months of negotiation. While trade tensions may be lessened in the short term by concessionary Chinese commitments, actual execution of deal terms appears uncertain.

The US has agreed to reduce tariffs from 15% to 7.5% on USD 120 billion of Chinese imports in exchange for a pledge from China to purchase a minimum of USD 200 billion worth of additional US goods and services between 2020 through 2021. The additional purchases taking place over the two-year period are outlined below:

The Phase One deal also provides increased protections for US companies that have long complained about intellectual property and trade secret theft in China. The deal states that companies should be able to operate “without any force or pressure from the other Party to transfer their technology to persons of the other Party,” with both sides agreeing not to support domestic companies’ acquisition of foreign technologies as to avoid disruption to business operations.

Negotiations also touched upon financial market access and currency practices. The deal not only loosens banking requirements for foreign financial institutions eager to operate in China, but also commits for improved foreign access to China’s financial services market. Furthermore, both the US and China affirmed their commitment against manipulating exchange rates and interest rates to devalue currency for trade advantages.

Advances made in global economic stability through the Phase One deal are contingent on fulfilling the commitments made by both sides as stipulated in the agreement. After analysing deal terms against historical trade totals, the reality of China’s ability to fulfil the additional purchases agreement is uncertain.

Only a few certain segments of total US exports to China are affected by the additional purchase commitments contained within the Phase One deal.

Total US goods and services exports to China, USD billion In the Phase One deal, China committed to increased purchasing of US good from USD 134.2 billion in 2017 to USD 210.9 billion in 2020 and USD 257.5 billion in 2021. If these purchase levels are even attainable, we can assume that China would be unlikely to increase the purchase of goods in segments uncovered by the trade agreement – marking a net 92% increase of US exports to China in covered products and increasing approximately 18% on an annualized basis between 2017 through 2021. This figure nears the average annual 21% US export growth to China during China’s 10%+ economic growth period between 2000 through 2007, and a comparatively bold increase from the 5% average annual growth rate between 2013 through 2017.

While the additional purchases would bring improvement to the current trade imbalance, the Phase One deal does not fully resolve tariff issues with approximately 69.4% (USD 250 billion) of total (USD 360 billion) Chinese imports unaddressed. While the Phase Two deal is likely to tackle these, Chinese importers and consumers will continue to bear the burden of higher prices on affected goods in the meantime. As the additional purchases mandated by the Phase One deal will further amplify the burden of these tariffs, it is unlikely that the commitment can be fully fulfilled.

Furthermore, in order to meet US targets, China would likely divert imports away from other foreign countries, which could plausibly lead to increased economic and political tensions. For example, as oilseed is the largest import good in the Chinese agricultural sector, it may consider replacing purchases from external countries like Brazil and Argentina with those from the US. 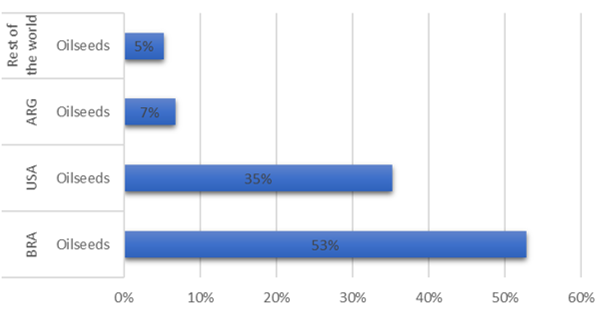 Therefore, implementing the measures required to fulfill commitments within the Phase One deal could ostensibly trigger market aftershocks, reduce the role of market-based economics in Chinese markets, and increase US economic dependencies on China.

The Phase One trade deal has served to ease US China trade tensions and reduce global uncertainties; however, the reality behind deal execution will remain a potential ongoing source of conflict for both parties. Any unresolvable disputes that arise could lead to the restoration of tariffs or other penalties and reintroduce heightened tension into the global economy.

Regardless, the US China trade dispute and the increased volatility it introduced to global markets may have far reaching consequences. Due to the long-term economic and operational uncertainties, businesses on both sides have faced nearly two years of instability that has driven them to expand operations elsewhere, find new suppliers, sell to foreign markets, or cut target market operations in hopes of mitigating risk. For example, as a result of punitive damages from the trade war, Chinese technology companies have needed to seek new partnerships and suppliers within alternative markets to make up for disruptions to their US operations. These disruptions, in addition to uncertainties surrounding China’s ability to fulfil the commitments outlined in the Phase One deal, may result in future market shocks and reintroduce heightened volatility.

Further complicating the execution of the Phase One trade deal, the novel coronavirus has significantly disrupted global supply chains and will weigh on economies across the globe – China in particular. While experts are uncertain about the scale of the coronavirus’ impact on the Chinese economy and whether it will be limited to 20Q1 or beyond, it is widely projected that the resulting stunted economic growth and stagnated business operations will certainly further impair China’s ability to meet the US purchase commitments.

Global economic stability is teetering, with markets anxious about the outcome of current events like Brexit, US elections, and various regional geopolitical instabilities. Reintroducing concerns on the US China trade war, along with the impact of the coronavirus could potentially tip the scales and bring heightened volatility to the global marketplace. We will continue to closely monitor developments in Phase One trade deal fulfilment and the impact of the coronavirus across the globe.