On October 8th2018, IMF has cut its global growth forecasts for 2018-19 to 3.7%, 0.2 percentage point down for both years than their last assessments in April 2018. In the report, IMF believed economic growth is easing in Latin America, the Middle East, and emerging Europe. It also projected lower growth rate for China and India. The tone of the report seems to be echoing the already depressingsentiments on EM currencies. Following the EM research FinEX Asia published last month, we are going to walk you through the current development of emerging markets and investigate where IMF is coming from.

As mentioned in our previous analysis, the major factors behind the emerging market currency turmoil are the strong US dollar, two deficits (current account deficit and fiscal deficit), high inflation, decelerating real GDP growth, and political instability. Based on those factors that we have examined, we further picked Indonesia Rupiah, India Rupee, and South Africa Rand as next possible victims, besides Turkish lira and Argentina peso that have occupied the headlines in FX markets.

From September till now, India Rupee and Indonesia Rupiah have depreciated 4.54% and 3.11% respectively, ranking as the two worst-performing currencies among all that we have monitored. South African Rand depreciated sharply by around 5% at the beginning of September among worries on land expropriation, but then recovered during the rest of the month as political tensions eased.

The onshore renminbi has further weakened by 1.06% from our previous study on EM currency in early September to RMB 6.9213 per dollar, lowest level of 2018. All eyes are on the psychological mark of RMB 7.0 against greenback as trade tension with the US mounts and the country’s economic fundamentals soften.

In response to the bearish market sentimentemerged since our last analysis, PBOC announce on 7 October that the required reserve ratio (RRR) for most banks will be reduced by 1 bp. Officials said the liquidity released will be used to replace maturing medium-term lending facility (MLF) and offset the seasonal liquidity demand. We see this as a boost to equity market amid the disappointing manufacturing PMI readings for Sep and recent record-setting defaults on its onshore corporates.

We anticipate Renminbi will be steadily pushing through 7.0 per dollar near the end of the year, the weakest level since the 2008 crisis. The good news to Beijing came on 19 Oct as US declines to label China a currency manipulator, after the governor of the PBoC, Yi Gang vowing that the central bank would not use currency as a tool to deal with trade frictions. Still, we are seeing substantial stronger onshore fixing than offshore level.

Renminbi against the dollar (RMB per $) Following our EM currency study in early September, Argentine Peso continued with an intensified sell-off and plunges to its record low 41.15 against greenbacks. A series of recovery, however, in October brought by the government wining the IMF loan, closing around 36.00 handle, slightly stronger than figures in September. Seeing the country’s primary deficit remains at a projected 2.6% of GDP this year, far worse than its regional peers, IMF boosted its aid package to $57 billion easing the default risk the country faces.

Unlike the US and Europe, Argentina has the private sector been forced to bail out the government. President Mauricio Macri’s priority should be propping up the confidence in private sectors, instead of embracing IMF austerity while seeing a 60% interest rate and 40% inflation rate. Mr. Macri’s new team is aiming at the re-election in 2019 yet the 10% unemployment rate is likely to rise, as will poverty, which currently afflicts about a third of the population. 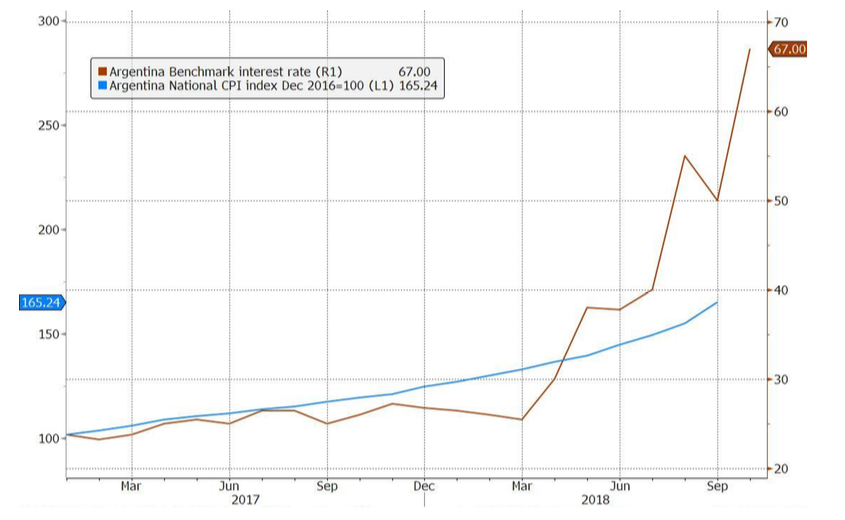 In the past one and half month, the dollar index turned weak and then return to the same level as at the beginning of September. As the dollar remains stable, the emerging market currency in general recovered. As we can see in the below chart, the JP Morgan Emerging Market Currency Index went up around 1.6% during the same period while dollar index only went up by less than 0.1%.

The rise of the EM currency index was largely attributed to the recovery of Turkish Lira (TRY) and Brazilian Real (BRL), which represents 8.3% and 11.11% of the total weight respectively. Since September, Turkish Lira and Brazilian Real went up 10.20% and 6.73% respectively, but the gains were less  brought up by signs of economic recovery but more by political/diplomatically situation improvement: in the case of TRY is the release of Pastor Brunson and the possible better US-Turkey relationship, and in the case of BRL is the pricing out of election uncertainty due to Brazil’s far-right candidate Bolsonaro’s large margin of victory. The short position covering spurred by the turn of sentiment has enlarged the gains.

Looking at Table 1, it’s not difficult to find out that Asian currencies, though as we said in last report more stable compared to CEEMEA and LATAM currencies, has been underperforming since September. We think this is because as the political tension loosen in CEEMEA and LATAM countries (e.g. Turkey, Brazil, South Africa, etc.), the market continues to weigh in the higher oil price and thus hurts oil import countries. Many of the major oil import countries are in Asia. As of press time, the oil price continued to surge up as the export from Iran tightened by more than expected and Saudi might not be able to fill the gap. In September, the Brent futures increased from $77 per barrel to around $83, while West Texas crude futures went up from around $69 to above $73 per barrel. And more people are worrying that oil price will later breach $100 per barrel.

The high crude prices are detrimental to oil import countries as it not only increases the costs for oil import but could widen those countries’ current account deficit, which measures the flow of goods, services, and investments into and out of a country. As we have mentioned in last report, widen current account deficit in strong dollar environment could be a very dangerous sign for the value of the country’s currency. Amid those countries we listed in Chart 2, we think India Rupee, Indonesia Rupiah, and Philippine Peso to be most vulnerable ones under the circumstance of rising oil price.

After our last study, there is a newly-minted United States-Mexico-Canada Agreement (USMCA), agreed in early October. It replaced the 24-year-old NAFTA and injected an important source of stability to the region.

Trump chose to nail down a bilateral deal with Mexico before threatening Canada into re-joining talks shows Mexico has been an increasingly important export market for the US. Securing Mexico bilateral trade agreement first allow Trump to power himself up in midst of an escalated and stretched trade war with Beijing.

Investors started shifting their attention to another potential hazard, Mexico’s incoming leftist president, Andrés Manuel López Obrador. Market generally are bearish over president-elect administration. Boosting infrastructure spending, raising pensions and subsidising farmers could support growth in short term, but worsen budget deficit, impossible to sustain in long term and increase vulnerabilities to domestic and external shocks. As the latest global economic outlook from IMF came to the same conclusion, Mexico will remain exposed to bouts of financial volatility in global market, it is expected that volatility of Mexican Peso remains high in the medium term.