Understanding Trade: Chronic US Trade Imbalance vs. US Dollar

Also, as imports are part of domestic demand falls on foreign goods, when higher domestic income drives higher domestic demand, it essentially leads to higher imports, and vice versa. When one country’s economy is doing well comparing with the others, it not only lifts its domestic demand, also attracts foreigner investors to invest in, or put this is way, to finance its trade deficit, just as what was seen in the 1990s. The robust economic growth back then in the US can in fact explain a sizable portion of the expanding trade deficit. 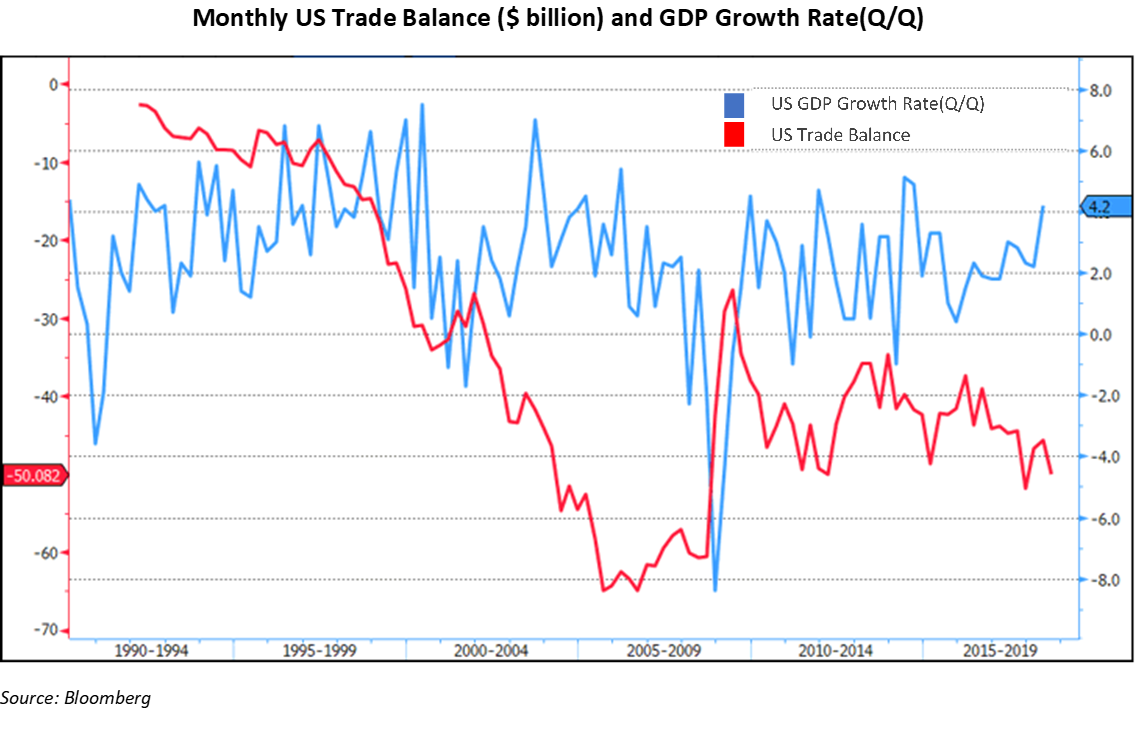 When we look at the US history for the past three decades, there were three recessions spotted in 1990, 2001 and the Great Recession in 2007. The recoveries followed by the brief recessions in the 1990 and 2001 both contributed a significant growth to the economy, the 1990 one stood out as it delivered the longest period of growth in American history. The US economic boom commenced in March 1991, supported by the steady labor market recovery while the inflation was low, the US GDP increased continuously for almost 10 years. The US trade deficit expanded dramatically at that time, it nearly tripled between 1996 and 1999, rising from $89 billion to a record of $254 billion.

The US peaked its trade deficit right before the 2007 Great Recession, back then US relied heavily on the strong foreign money inflow into American stocks and bonds, and came the subprime crisis triggered by housing bubble, led to the most severe global financial crisis after World War II. With even the oil and food prices soared, it caused the largest annual drop in imports of goods of the US, producing the largest decline ever in its trade deficit. In the 1990s, the strength of the US economy relative to its trade partners’ is commonly viewed as the main reason behind the rise of trade deficit. The differences between the growth rates caused the trade flows to the US from foreigners. Imports rose rapidly while exports could not catch up the speed, trade imbalance then deteriorated.

As to the Great Recession period, as the crisis was centered in the US, the capital inflow to the country diminished. During that period, seven of the top 10 origins for U.S. imports were in recession, while eight of the top 10 export destinations were in recession. The trade imbalance improved significantly while imports fell by 26% and exports fell not by as much, resulted in $315 billion improvement in its trade deficit. Even though one country’s trade deficit generally causes its currency weakness as the country would face the capital outflow when the imports exceed export, which shrinks the demand of the currency of that country, leads to the relative value of the currency to drop. But when we look at the history of US dollar, it is telling a completely different story.

What makes US dollar so unique is that the US provides the world with liquidity and US dollar is at the same time considered a safe haven currency, so the demand for US dollar comes from both cross-border trade settlement also safe keeping purpose.

As mentioned above, when the economic condition of one country is in a preferable shape, it attracts people to put their money in, compounding that the US dollar is acting as the world’s reserve currency and is heavily used in global trade, people and governments around the world tend to store their wealth in American assets like stocks and bonds.

When a country like the US is running trade deficit, it buys goods and services from the trade partners more than the other way around, but majority of the settlements are in US dollar instead of trade partners’ currencies. Meanwhile, as US dollar is heavily weighted in the world’s reserve pool, the two factors lead to the demand on US dollar exceeding the supply. As the exchange rate is the relative value of one currency against the other decided by demand and supply, US dollar tends to appreciate under the circumstances. 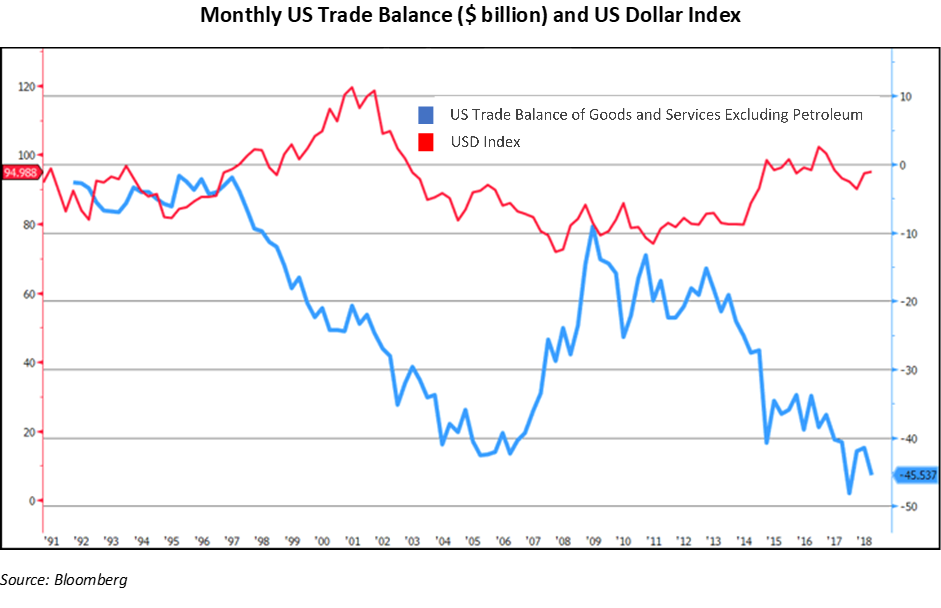 As a result, significant private capital inflows into the US in the 1990s supported by relatively high rates of growth and in search of a safe haven from the Asian financial turbulence, contributed to the growth of our trade deficit, caused the US dollar appreciation.

Regarding the latest announcement by the US Census Bureau, the US trade deficit widened by 9.5% to $50.1 billion in July of 2018. It is the highest trade gap in five months as imports hit a new record high by increasing 0.9%, and exports slumped 1%. The goods trade deficit with China rose 10% to a record of USD 36.8 billion. The trade deficit also increased with the, Japan, OPEC and Canada. The decline of US national saving, including the federal saving and personal saving, accelerated in the 1980s due to the massive capital inflow, which elevated the price of American assets, made the people in the country feeling rich and saved less. The deficit was also fuelled bythe excess of investment over savings, could equally be pointing to a higher productivity from labour market, and growing economy.

The robust growth of the US in the past one year again brought capital inflow to this country and widen the trade deficit. As the US economy is still in good shape especially in the consumer spending sector, in the foreseeable future it shall continuously contribute to the capital surplus, which will unsurprisingly keep the trade deficit at similar level, despite the policy uncertainty US President Donald Trump might brought to the relationship among its trade partners. The US dollar appreciation would still be expected as we do not see any potential changes on US dollar’s heavily demanded role being replaced whatsoever in the short run.