2019 US Economy and Consumer Credit Outlook

2018 overall is not a bad year for the U.S when it comes to economy growth.

Even the monetary policies tightened by Fed, the U.S. economy, with the help of fiscal measures, has been outperforming other developed economies in 2018: The GDP growth accelerates, thanks to the tax cut, to 3.5%, 4.2%, and 2.2% respectively for the first three quarter of 2018. Labour market remain healthy and the unemployment rate is at historic low of 3.7%. Earning growth rate has raised to above 3% the first time since 2010 while inflation rate is around 2%. We maintain our base case projection of GDP growth in 2018 and 2019 at 3.0% and 2.5% respectively. We acknowledge that there will be headwinds such as trade wars, wider budget deficit in 2019. However, we believe the US economy will stay sound and labour market remain healthy with the support of tax cut benefits, possible infrastructure spending, and anticipated slow-down of interest rate hiking.

In 2018, US has been leading the world shifting to fiscal stimulus deployment while pulling away from monetary easing. The tax reform introduced by Trump Administration in December 2017 has been boosting up the economic data of the U.S.

Even though the stimulus from tax cut is temporary, our model suggests the boost up effect will continue to be strong in 2019. The impact to GDP will be about 0.4% before the impact dissipates in 2020 and 2021. We estimate the GDP for 2019 will be 2.5%, which, though lower than 2018 estimates, is considered a healthy level comparing with its long-term GDP growth rate of 1.8-2.0% as projected by Federal Reserve Board. President Trump has mentioned about tax cut 2.0 a few times before. However, the tax cut has also putting US government deficit under pressure. With the US budget deficit hits widest on record for month of November in 2018, and Democrats gained control over the House after the Mid-term election, there will be little chance for any further tax cut in 2019 under a split congress.

Even though the two parties will not cooperate on another round of tax cut, they will likely to work together toward a new federal infrastructure spending package. Upgrading the nation’s infrastructure was not only one of Trump’s campaign promises that he is keen to deliver, but also embraced by Democratic politicians. We believe an infrastructure bill will be one of the few areas on which both parties will corporate.

We also anticipate delay of the 2020 fiscal cliff. This combines with the remaining impact of tax cut 1.0 and possible infrastructure plan would continue to provide support to US GDP growth in 2019.

The Fed has increased interest rate three times this year and bring the upper band of Fed Fund Rate to 2.25%. As the target rate marching close to neutral rate, we believe Federal Reserve will be more cautious to control the policy rate not spurs or reins in economic activities.

Other than inflation rate, one of the main factors with Fed’s consideration for rate decision is unemployment rate and the performance of nonfarm payroll. Although it is too soon in the current stage to tell if Fed has ended its rate hike cycle, there is good ground for the market to participate the less hawkish rate policy.

In the past few weeks, market has been pricing out 2019 rate hikes because of Fed Chair Powell changing to more dovish tones by saying that interest rates are “just below” the “broad range” of estimates of neutral rates. The minutes from the November FOMC meeting also confirmed a dovish shift in wordings. Currently (as of Dec 12), market only reflects one rate hikes while just one month ago two were priced in.

We think there will be two interest rate hikes in 2019 since we believe the US GDP will maintain growth momentum with stimulus provided by fiscal measures, and the neutral interest rate is around 3%. Our estimation is one more time above market indicated number and one less than the latest guidance released by Federal Reserve. We think given the recent sharp decline of oil price and headwinds of trade conflicts, increasing interest rates three times has become less likely.

In the first eleven months of 2018, the U.S. has added 206K jobs per month in average while the unemployment rate reached to lowest since 1970 at 3.7%. The job openings rate is also on a upward trend. The latest release was 4.5% in October, which is a much higher than 4% in the beginning of the year. In addition, the voluntary separation rate raised up to 2.7% in 3Q2018 and 2.6% in October. All those numbers are suggesting tight labourmarket will continue and the demand for workers will be resilient despite trade conflicts. We anticipate the unemployment rate will head down toward 3.6% in 2019. Tight labourmarket and low unemployment rate will continue to put upward pressure on average earnings growth and core inflation. 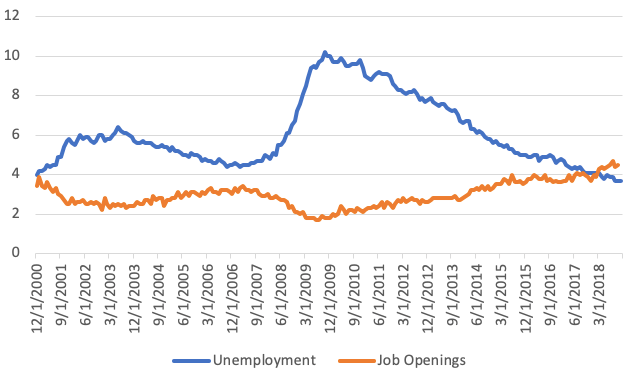 In line with the dropping household debt levels, the growth of consumer credit has also slowed down significantly since the end of 2016. In October 2018, total outstanding consumer credit grew at a rate of 4.7% annually, compared to an average of 6.9% during 2014-2016. The slowdown in consumer credit occurred in both revolving and non-revolving segments.

Another reason for the slowdown in consumer credit is the credit standards tightening started in 2015. A survey of 72 domestic banks conducted by Federal Reserve that lenders are looking at loan applicants with a more critical eye. The standards for credit card loan applicants has moved up the most among all.

The tightening of credit standards, especially for credit cards, occurred when the delinquency rates for comsumer loans went up in 2015. Though the stricter standards will rein in the total outstanding amount of consumer credit, it could improve the quality of consumer loans and bring down the delinquency and charged off rates, which would be quite benefitical for consumer credit investors.